A Rising Tide in Villa Corazon

“Before, the first thing we did every morning was to fetch pails and pails of water. Now, we have a hose that brings water directly to our homes.”

The community of Villa Corazon in the Philippines is scattered along the side of a steep incline. It’s difficult to tell if the roads that connect the community existed before the clusters of homes that make up the community, or if the homes dictated where the roads should lead. The space between neighbors offers privacy and the ability to farm small plots of land, but also spreads the community apart to the extent that the benefits from wide-ranging, successful projects in one area fail to ease the community’s burdens equally.

This is why projects have phases.

The first phase of Villa Corazon’s water system implementation in 2016, comprised of a large-capacity tank, a heavy-duty electrical pump, a network of pipes and water-collection basins, provided reliable access to community members at higher elevations. For those living farther down the incline, fetching a day’s supply of water remained an uphill struggle. 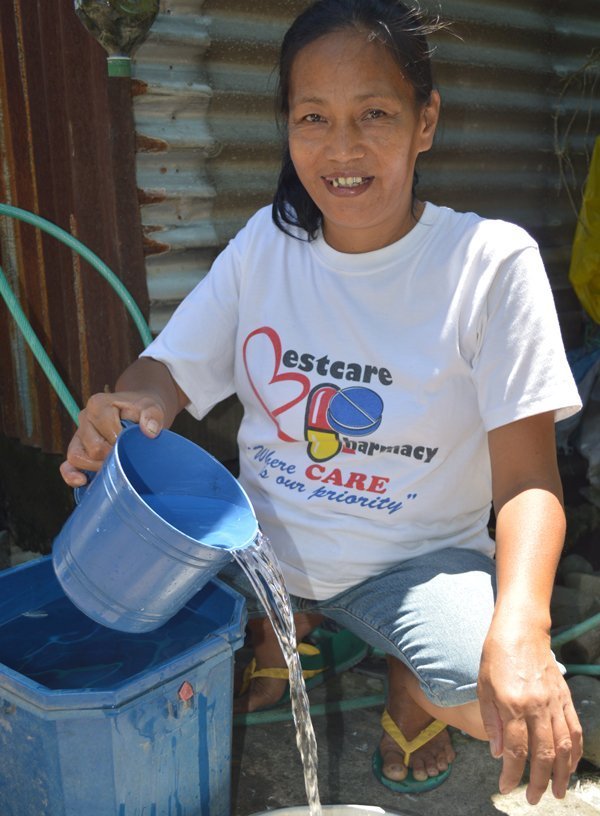 For Jakielyn, a single mother caring for her teenage daughter and young niece who moved onto her mother’s property in Villa Corazon in 2017, obtaining enough water for her family each day was a considerable issue. Lugging even an empty 55-gallon drum 500 yards uphill is difficult and time-consuming, and attempting to make it home with a full drum was a logistical impossibility. Her only option was equally unsustainable.

“I cannot fetch water by myself,” Jakielyn says. “My mother and I pay someone else a monthly fee of $40 to do it for us every day.” Even with this expensive convenience, Jakielyn’s family was still limited to 55 gallons of water each day, which was never enough to meet their needs, even though they used it sparingly. This meant that when the water used for washing clothes was re-used to flush their toilets and water the plants on their property. They supplemented their supply by collecting rainwater, using it for household chores as well as drinking. Though Jakielyn boiled it beforehand, the brownish color remained as it swirled and settled in their glasses.

When SMMVC, the Outreach-facilitated group of farmers living further upland from Jakielyn who had completed the first phase of Villa Corazon’s water system, began to meet about a second phase that would provide access to clean water for more community members, Jakielyn made sure she was in attendance.

SMMVC group members applied their relative expertise to every aspect of phase one, from the physical labor of hauling materials and excavation, to the task of cooking meals for hungry helpers. Jakielyn’s mother had donated a portion of the land used for the first phase, and came to know SMMVC members who tended to meal preparation in her backyard. When Jakielyn was first introduced, her only interest was to be included in among the other beneficiaries of the project’s second phase. As time passed, she grew closer to the group members and its leaders, who encouraged her to join them in other Outreach-facilitated income-generating projects in the community, like reforestation and the production and sale of cassava chips. Having witnessed, and even longed for, the results of their teamwork firsthand, Jakielyn didn’t hesitate to come aboard and add her enthusiasm to theirs. 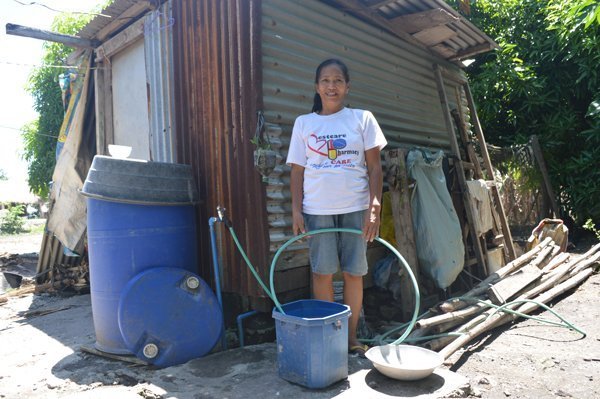 SMMCV members, practiced in the art of success, completed work on the water system’s expansion a few months after meeting Jakielyn. Besides extending the network of pipes further downhill, the team rehabilitated and modernized a disused well located 10 meters from Jakielyn’s home as a communal access point. Besides Jakielyn, the second phase of Villa Corazon’s water project benefitted 252 other community members.

The changes made by this project in Jakielyn’s life are representative of the impact it made in her neighbors’ lives, as well: Instead of contending with the expense and exertion required to fetch water from the well rehabilitated as part of the first phase located 300 meters or more uphill, Jakielyn and others nearby now make as many short, simple journeys as they please to fill their basins at their backyard faucets. In return, community members are able to save the money they previously spent on water delivery and save the time they once devoted to daily collection. Now, both commodities support community members’ other efforts to increase their income and opportunities.

For Jakielyn, these opportunities include expanding the size and scope of her garden, and welcoming a brace of ducks into her family, who show their gratitude with a steady supply of nutritious eggs and by keeping wandering-off to a minimum. Why would they ever leave? They have everything they could want, right there in Jakielyn’s backyard. 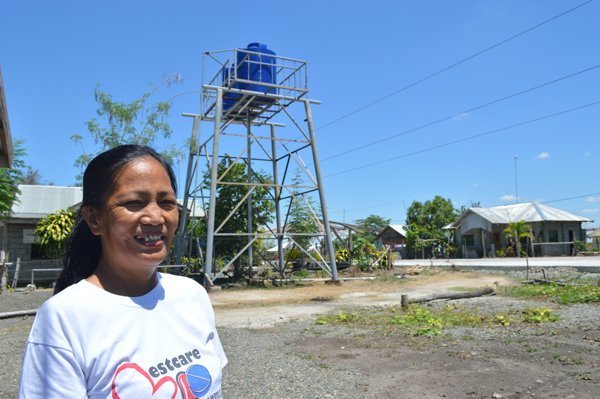 “It’s a relief to be able to wake up in the morning and water is just there ready to be used. Before, the first thing [we did every morning was] to fetch pails and pails of water.” Jakielyn says. “Now, we have a hose that brings water directly to our homes.
Before, my daughter had to fetch water, even if she is tired coming from school. Now, she can have more time to rest. Before, people have to wait in line for an hour [to fill a bucket with water], because [there was usually an] average of 20 residents waiting for their turn. Now, people can just open their faucets and fill up their containers.”

Obviously, this is great news. It’s even better news in context of Jakielyn’s newfound enthusiasm for completing life-changing projects elsewhere in her community as part of SMMVC. She regularly shares many things with her fellow members, from materials like rice, to information about new projects, to insights like the following:

At the close of her interview, Jakielyn says that regardless of the organization, without participation, there are none of the blessings that come along with success. “We should help out in any way we can, and not just depend on what will be given to us.”

“We should give our own share,” she says, “to make it better.”

You can support our community partners as they work together on projects like this one to achieve wetter, better lives. Sign up today and become a monthly donor.