If you’re anything like us, you’ve been waiting with bated breath to hear further updates from India on our friend Kalima’s buffalo brood. The wait is over!

To recap: Our friend and partner Kalima owns a water buffalo who, for a worryingly long time, wasn’t too keen on motherhood. Since one of the main reasons for owning a water buffalo is the promise of more buffalos to come, this matter proved quite vexing, until one day, when the old saying “A watched buffalo never mates” proved as true as ever. Cut to a year later, when Kalima’s bouncing baby buffalo, who had by then had grown into quite a refined young gent, celebrated his first birthday with an extra helping of feed and a fun party hat.

Kalima and her buffalo pals have been busy over the past year. The three of them have plowed fields, hauled heavy loads, divvied up fertilizer to make fields greener and stables less-brown, and sold Mama Buffalo’s milk at market for a tidy sum. Oh, and amidst this frenzy of sustainability, Kalima’s flirty buffalo went and found herself a new suitor. It was all very romantic.

So romantic, in fact, that we’re thrilled to share news of the newest member of Kalima’s ever-expanding herd: Last month, Kalima welcomed a sweet-faced li’l buffalo gal into their family. Their new miracle has been working overtime to grow up big and strong like her buffalo peers, and Mama Buffalo is more than happy to oblige by supplying extra milk-on-demand.

Kalima is now earning enough money each month to support herself, her five children, and her eight grandchildren.

So much extra milk, in fact, that Kalima has been collecting five liters of “white gold” a week! She keeps one for herself, and sells the remaining four at market for a profit even more robust than the somewhat-gamey taste of the milk itself! Along with the extra pulling power and fertilizer, Kalima’s sitting only slightly-less-pretty than her baby buffalo, who, to be clear, won’t keep her looks forever, ensuring Kalima’s place as the all-time cutest member of her family. 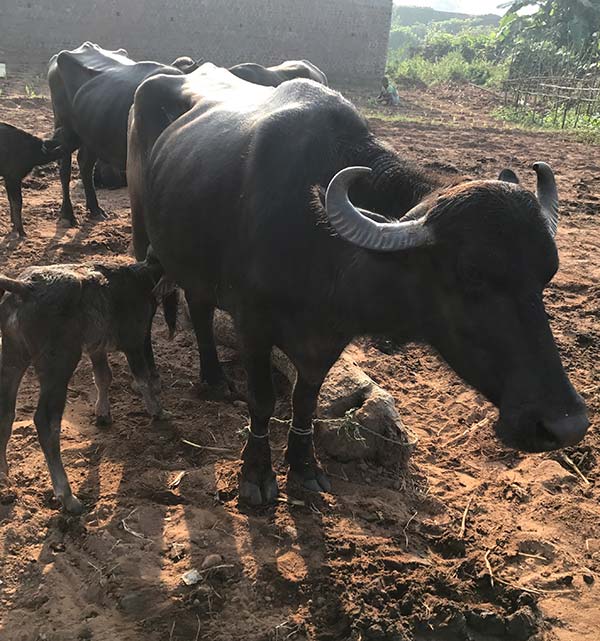 By this time next year, Kalima’s first calf will turn three, which is the magic age for a buffalo to earn the highest price when sold at auction, bringing a windfall of $300-$400 US, as well as clearing up a spot in the barn. They grow up so fast (luckily for Kalima).

When we spoke with Kalima about the stampede of good things brought about by all these new buffaloes, she instantly expressed her happiness that her ability to earn money on her own not only lifts the burden from her children of having to support her financially. She’s now earning enough money each month to support herself, her five children, and her eight grandchildren. How about that? Kalima’s buffalos are so thoughtful, they use their own birthdays to give gifts to others. The buffalos jokingly call this “Hay-ing it forward,” because they deal with a lot of hay on a daily basis, and also because they’re generally pretty terrible at puns. Everything else, though: Gold-standard!

You can provide our community partners with the tools they need to write heartwarming stories like this one over at Outreach Shop, where we have everything from A- to Buffalo. Take a look: OutreachShop.org