Back to School in Peitonville, Haiti 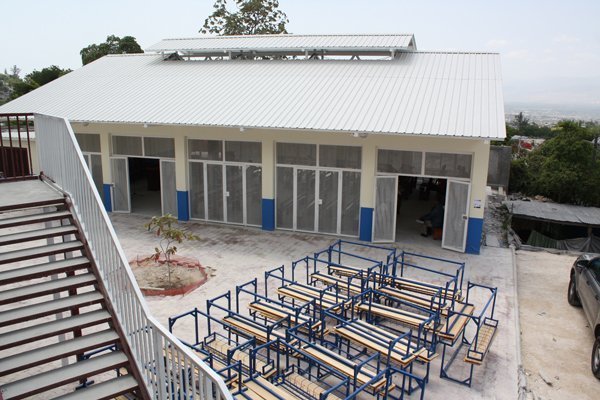 “A school is four walls with tomorrow inside.” – Lon Watters

All of us, no matter our circumstance, take things in our lives for granted as a means of ordering our lives. The sun will rise and set. Birds will sing. clouds will pass. And each new day is an opportunity to refine and perfect all that has come before. Disaster rarely creeps. It strikes, sudden and catastrophic, enforcing disorder and upending our sense of normalcy, safety and certainty.

A 7.0 magnitude earthquake struck the community of Petionville, Haiti in 2010. The structural damage to buildings and homes equaled the harm visited upon the continuity of residents’ lives. Children too young to understand what was happening believed there was a big snake moving around underground. This is what they told the adults who were present. The loss of life and destruction of property were the deepest, most immediate tragedies. But as the event receded into the past, other foundational absences lingered. Symbols of promise were replaced with an empty space, looming over cracked foundations.

For residents of Petionville and Outreach supporters, rebuilding a school was more than an attempt to recapture normalcy. It was a concerted effort to reject tragedy and assert resilience. Architects from nonprofit design firm Article 25, local experts, leaders, and workers, Petionville came together. They planned, designed and erected a new school to stand as a symbol of, and inspiration for, the strength that comes from hope.

“We are grateful for your unconditional contribution to the children of Haiti, their sacrifice, their deep love, and their fraternal sense of selflessness.” – Augustin, Petionville School Program Coordinator

“The undertaking was more than a matter of logistics,” according to Bea Sennewald, Director of Projects at Article 25. “We talk to everyone in the community who will be involved. It’s more than just a school. It’s there 24 hours a day, and has many other uses outside school hours that can be integrated. They have classes for adult literacy, cooking, sewing, or making things that can be sold to improve livelihoods, and you don’t know what those things actually are until you engage with the community,” she said. “This is their school, not ours.”

After consulting with community partners to determine a versatile design that would serve their needs, construction began. The school boasted six classrooms, multiple restrooms and hand-washing stations, a kitchen, a rainwater catchment and storage system. It also included a community room to accommodate larger gatherings and assemblies. Ultimately, the school could accommodate 300 students.

Setbacks and slowdowns led to revised timelines for completion numerous times during construction. But neither the generous support of Outreach donors nor the determination of the community ever wavered. Bit by bit, year by year, the school took shape. Ultimately, they filled the empty patch of sky that had served as a reminder of loss for so long.

In Practice, Made Perfect 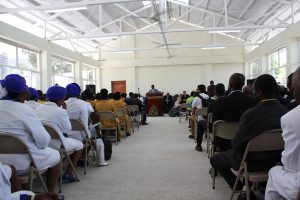 This past June, Outreach CEO Dr. Kevin Prine, Outreach representatives, Director of Field Operations Andrea Read, and members of Article 25 gathered with Petionville residents. Together with school administrators they celebrated the end of construction, and the beginning of a new era. Climbing temperatures outside threatened the comfort of those in formal attire for the event. But the building’s sensible design maintained a climate of jubilation in the community room.

Sitting near the back, Abul Mahdi, a Project Architect from Article 25, reflected on the considerations that went into ensuring a successful outcome. “We’ve been in here all day with hundreds of people in this room, and no one’s broken out in a sweat,” he said, pointing around the room. “The roof was designed with solar shading and cross-ventilation, so all the hot air escapes.”

“As a participatory project, the goal was more than putting up a building; it was to build something more than a structure. The Haiti school reconstruction fits into the local context, the climatic conditions, using materials that are available locally, as well as utilizing the construction methods that people here are used to.”

Inclusivity is a wonderful approach, but the feel-good vibe stops immediately if the building crumbles in the next earthquake. “We worked with seismic engineers to ensure that the school was ready for anything. For instance, the gable walls in this community room reflect a seismic design approach. So instead of being the first thing to collapse in an earthquake, they’re the reason it’s still standing afterward.”

The opening ceremony drew hundreds of residents, supporters and prospective students. Augustin, the school program coordinator, articulated the gratitude felt toward those who helped make the day possible: “Please, noble assembly,” he addressed the crowd, “turn your eyes to this brand-new room that has been directly and gracefully built by donors to Outreach International.” Donors, he said, “decided to invest in the human, particularly in children’s education, to show their belief in the value of any human person.”

“We are grateful for your unconditional contribution to the children of Haiti, their sacrifice, their deep love, and their fraternal sense of selflessness.”

As the new school year approaches, the children of Petionville are poised to reclaim their sense of certainty and embark on a path ahead with a sense of direction. What for years was a reminder of the impermanence of foundational elements now symbolizes something they may have never seen in their young lives: Something miraculous that didn’t appear instantly, as if by magic, but emerged carefully, deliberately, confidently from the broken ground like a sapling stretching toward the sheltering sky. It represents more than a place for learning or nutritious daily meals. It is a story. A statement. An inspiration. A testament to the magnitude of hope, trust, and partnership. Unshakable.

You can help our community partners build lasting opportunities worldwide by becoming a monthly Outreach donor.