What things keep you from making your dreams come true? Scheduling issues? Failed attempts? Exhaustion? Self-doubt? There’s always a reason to give up if you look for one. 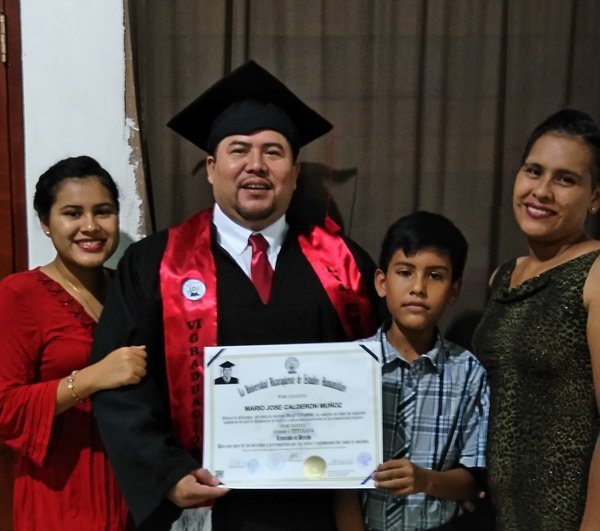 Mario, a facilitator with Outreach Nicaragua since 2003, had plenty of good reasons to give up on his hopes of earning a law degree. Traumatic experiences from primary school: Check. Persistent issues with hearing loss: Check. Daily household responsibilities as the youngest of nine siblings: Check. A years-long, literal civil war in his country: Yep, and plenty more hurdles lining his path to the finish. Any one of these factors could be more than enough justification to quit, if Mario were a quitter. But Mario isn’t a quitter. Mario is the sort of person whose dedication is so immense that when he reaches his goals, it demands coverage.

“None of my brothers completed their studies because of the civil war that Nicaragua lived through in the ’80s and ’90s,” Mario says. Mario made his first two attempts at getting his degree starting in 2000, after a ceasefire was implemented and some degree of normalcy returned to Nicaraguan life. He was able to handle the workload both times, but covering tuition costs proved too great an economic stretch, so Mario had no choice but to leave school and nurture his plans to try again as soon as he was able.

There’s an old joke about getting to Carnegie Hall that also applies to Mario’s journey, with a slight change of venue: Q: How do you graduate law school? A: Practice, practice, practice.

Walk a Mile (to school) In Someone Else’s Shoes

Between his attempts, he started work in 2003 as a facilitator with Outreach Nicaragua, which he calls “One of the greatest blessings in my life.” In 2008, he returned to school, only to leave again after completing his first year, reasoning that it was too difficult to juggle his educational aspirations along with his professional and personal responsibilities.

While working on-site in a partner community one day, Mario met Outreach’s former Director of Field Operations Dennis, and struck up a conversation about the path that led him to Outreach, including his truncated attempts at higher education.

A little while later, Dennis approached Mario bearing gifts. The first gift came in the form of a pair of “wild shoes” — a colorful set of Nikes — and the second was something else to help Mario go the distance: A quick lesson from Dennis.

“When Dennis gave me the shoes, he said, ‘You have my shoes,'” recalls Mario. “Then, he pointed to his head, and I understood that he could not give me his intelligence. At that moment, I reflected on all the opportunities I had to continue my studies; the obstacle was in my mind.” Then, in a revelation that would set the stage for the triumphant third act of this article, he looked within and, in his words, “from the depths of my heart, I felt the strength to return to my studies for the fourth time.”

“So,” he continues, “I gathered my family to share what I wanted to do, and shared with them my dream, and they expressed their full support.”

“I dedicate this diploma to my family, my coworkers, and Outreach International. Everything I am is thanks to the support of each of you.”

As he persisted, the class around him shrank, with 14 of the 16 students in his class dropping out by the end of the year due to economic hardships. Eventually, it was just Mario and one other student in class. After both of them spoke to the University’s rector and received news that the school planned to close their law program due to poor attendance, the other student dropped out, making Mario’s course into an independent study.

After coming so far, Mario wasn’t about to let a minor issue like the absence of coursework or professors stand in the way of his degree. He worked out an alternative course of study with the school, getting placed into an advanced law program with other students, though he was told he would be expected to maintain passing grades to continue. To fulfill this expectation, Mario packed his weekends with classes and further study, in addition to his ongoing Outreach duties and family responsibilities.

Then, one day, after working so hard for so long, Mario found that all the work was finished, and he’d earned his degree. He graduated law school in May 2018.

“It was not easy to finish my law degree, in all aspects — economically or logistically. I was often tired, waking early on weekends and spending all day at the university, instead of sharing the day with my children,” Mario shares in a written reflection that is literally titled “A DREAM COME TRUE WITH DEDICATION AND PERSEVERANCE.” “I dedicate this diploma to my family, my coworkers, and Outreach International. Everything I am is thanks to the support of each of you.”

Though incredibly effective at making us tear up at his immeasurable sincerity and sweetness, Mario knows to go out on a joke.

Outreach facilitators are so superhumanly dedicated that they get law degrees on their days off. Support the work that supports the work. Donate to Outreach and show facilitators like Mario that we’re behind them all the way as they demonstrate daily what it takes to make a better world.