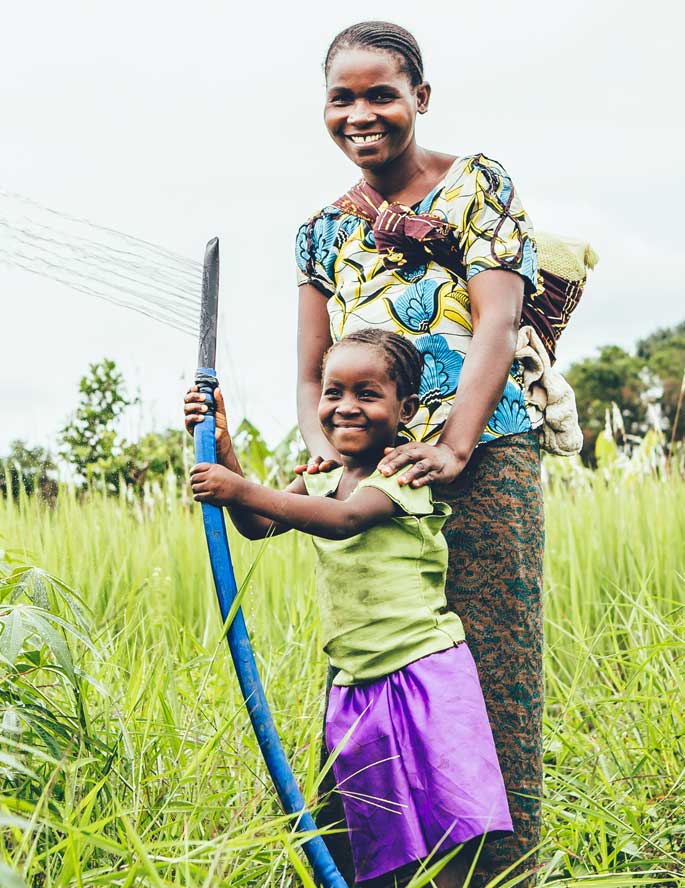 For a mother of eight, Emeldah is remarkably energetic. A member of the Outreach-affiliated Chamata community in Zambia, a photo of she and her daughter, Justina, watering crops graced the cover of Outreach’s 2014 Annual Report. When Wayne Rowe, Outreach’s favorite shutterbug, caught up with Emeldah and Justina (now nearly 6 years old!) we were thrilled to see that Emeldah’s smile hadn’t dimmed one bit.

“Three boys and five girls,” she says about her kids. “My oldest child, Catherine, is 25.” Her youngest? “He is four months old.” Considering Emeldah has worked alongside her husband nearly every day, tending crops to earn income, it’s a testament to her character that she’s so relentlessly sunny.

“Before PHDp [Outreach’s Participatory Human Development program] in Chamata, I always had that fear in me I could not speak to an audience, especially when the men-folk were around,” Emeldah says. “Today is different– I can boast of speaking as chairperson during our [community] group meetings, even when we have visitors. I am now able to stand and speak at our local church. I do this with no fear in me anymore.”

Emeldah’s increased leadership role within her community has served as both a means to provide her children with a better life, and as an example of how they themselves can achieve their own goals throughout their lives.“It gives me happiness whenever I see my children in good health, playing with other children in our community,” she says, when asked about her favorite moments being a mom. “When they speak and share their feelings and stories, it also gives me great happiness.”

Emeldah’s hopes for her children’s futures include a good education, good jobs with steady incomes, stable marriages, habitable houses, and to be able to bear and raise humble, obedient children like themselves. Having participated in Outreach-facilitated, community-led projects for years, she and her husband have been busy building a life for their family, rich with opportunities.

“I want them to lead a better life than us today,” she says. “Life which is free from dependence and other social ills.”

Thanks to Emeldah’s hard work, enduring love, and unflagging energy, her children have a great example to follow for their own lives, and an example after which they can model their own families for generations to come.