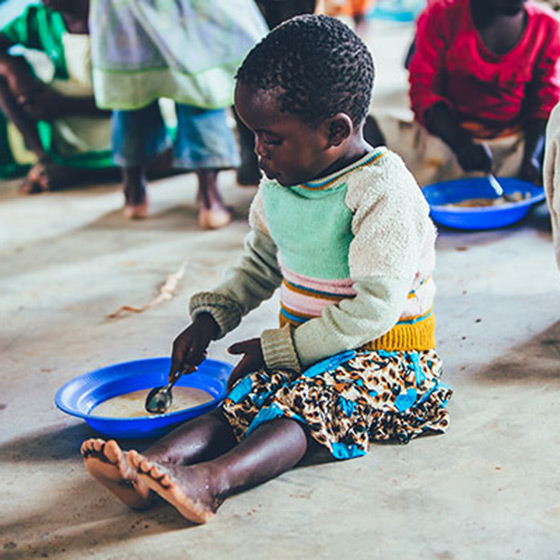 Krantz was a veteran of the medical field and a former nutritionist before moving into work in community development with the residents of her adopted home. In her efforts to address the growing number of under- and malnourished children living in poor regions of Nepal, Krantz, along with a local partner, developed a recipe for what is now commonly referred to as ‘superflour,’ using low-cost, widely available local ingredients to create a high-protein porridge.

Preparation is simple and flexible enough to accommodate local ingredients: Take two parts protein, such as dried beans of any variety, and one part grain, such as rice or corn, roast proteins separately to enhance digestibility, then grind or mill the grains, mix in correct proportions, add water to desired consistency, and enjoy.

Superflour justified its boastful name, meeting nearly all daily nutritional needs for everyone from adults to children as young as six months old. It requires only slight modifications to its preparation to suit recipients’ respective dietary requirements. Fifty grams (or roughly two fistfuls) of uncooked superflour supplies 366 calories and a host of nutrients, vitamins and minerals when supplemented with green, leafy vegetables and a drop of oil.

“Krantz said that it [superflour] should be promoted as a food, not as a snack,” recalled Labayen. “She didn’t want sugar to be added, because it makes children hyperactive and promotes eating habits that can lead to health problems later in life. She didn’t want salt mixed in, because salt can be hard on the kidneys. Otherwise, the recipe can be adapted for whomever will be eating it.”

Adoption of an elegant, affordable, practical solution to malnutrition and hunger should have been rapid and far-reaching. But it wasnt.

“I started to adopt her idea for my work,” said Labayen, “but none of my colleagues would accept it.” Despite its efficacy, the simplicity of ingredients and slight learning curve to their preparation made superflour a tough sell.

“When I was in the Philippines, I was grinding my own superflour and selling it– I had a plastic container full of it, but it wasn’t taking off. People weren’t buying.” Labayen attributed this to a perceived disparity between it and the lesser advantages boasted by its prepackaged competition. A do-it-yourself product advertised through word-of-mouth is no match for brands that take both the guesswork and the labor out of deciding what to eat. Superflour’s ingenuity as a modular, adaptable, democratic product is both its greatest strength and a perpetual weakness in the marketplace.

“The packaging needed to be better,” said Labayen of his early attempts at selling superflour. “How can you compete with a multi-million-dollar company’s marketing, when the products they sell are full of salt and sugar?”

“When I visited Nepal recently,” he went on, “I was surprised to see superflour being sold in stores. Companies there repackaged the recipe and sell it all over. They [corporations] got ahold of the idea– that’s the problem. Now they’re making money off it.” Worldwide, superflour’s difficult journey to the plates and bowls of impoverished communities is rooted largely in the fact that it demands a degree of labor slightly more intense than pulling a product down from a shelf. “The slow adoption is because of the preparation, the cooking– people want things that are instant.”

Luckily for those most in need of a low-cost, reliable source of nutrition, people also want things that are brilliant. In addition to cooking demonstrations in many of Outreach’s partner communities worldwide, members of the Outreach field staff in certain countries have made implementing superflour as a dietary staple a personal crusade.Rather than try to position superflour as a staple prepared or purchased by individuals, members of the Outreach field staff in DR Congo and Zambia have suggested it to those with whom they work as a community-managed feeding program. The results have been so successful, they could often legitimately be considered miraculous.

Outreach Zambia community partners Dickson and Florence Sanene worried about the health of their son, Richard, before being introduced to superflour as part of an Outreach-sponsored feeding program. “At the age of 3, Richard was still unable to walk,” said Florence. “Sometimes, I was reluctant to take him to the feeding, because I did not believe the porridge would do wonders for the malnourished children. Howe’ver, after feeding him [superflour] four times a week for three months, to our surprise, Richard started to walk.” Dickson added that, before Outreach’s introduction of superflour into their community, “We were completely ignorant on how best we can feed our children and ourselves. We thought that eating well meant eating beef, chicken, and sausage. We are so happy that, from the grains we grow locally, we can come up with a food like superflour.”

This success has not been limited to those living in Outreach-affiliated communities. The field staff have had remarkable results in their own homes after introducing superflour. Trust Kabamba, a staff member of Outreach Zambia, began feeding superflour to his 4-month-old son, Emmanuel, once his wife returned to work after maternity leave. Months later, not only had Emmanuel responded well to the introduction of superflour as a nutritional supplement in his diet, his progress was such that the Kabamba’s pediatrician suggested Emmanuel’s superflour intake be curtailed to maintain a healthy weight. At six months old, he was crawling, standing and grasping objects, and had not experienced any serious illnesses or health issues beyond those of the average child. “It really is a superfood,” said Trust.

Applied correctly as a meal, superflour is an incredible means for healthy development. Applied correctly as a product, its impact as a means for economic development is equally incredible. Bridget Kalumba, a resident of the Kapisha community in Zambia, found herself looking for a way to feed her seven children after her husband was forced to retire from his mining job due to medical issues. After six years trying to make ends meet working as a maid in the distant town of Chingola, Bridget decided to strike out on her own as an entrepreneur. Having participated in a month-long superflour-based trial feeding program, Bridget began selling superflour by the Kapisha roadside as a means of generating income.

She sold out of her entire stock in four days, and by the end of her first month had restocked and sold out again four times over. Revenue from her superflour sales exceeded the combined income from the days when she and her husband both worked for others. But her motivation is hardly based on her bottom line.

“I don’t see myself as a woman just selling superflour. I see myself as a doctor, saving the lives of children in Kapisha,” said Bridget. “I do not consider it [superflour] a porridge or food. To me, it is more than that: It is medicine. Ninety percent of my customers are mothers of children who are sick, under- or malnourished children who have lost their appetites, and even children who are not growing fast. I’ve seen them regaining their appetites and putting on weight. No child will refuse superflour. It is the best of the best!”

Like seeds carried by the wind, news of superflour continues to spread. With each new season, growth is increasingly abundant, and that which was barren emerges verdant and hardy. Cultivation requires only the will to nurture, and the patience to believe.

Note: This article originally appeared in the Summer 2016 edition of Outreach Magazine. Click here to read the full magazine.

Your support for Outreach empowers communities to work together and ensure the health of future generations. Join us today.